Sale on canvas prints! Use code ABCXYZ at checkout for a special discount!

What the Hell is She Doing?

Previous Next View All 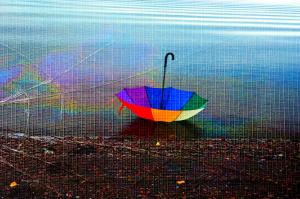 I’m in this networking group of entrepreneurs who challenge and help each other succeed in different business areas. Last week I was challenged to focus on just one subject in my photos instead of running around and shooting everything I see as I normally do. I decided to make a series on my rainbow colored umbrella. I love the colors and thought it would be fun to experiment a little. As some of you may have noticed I already have gallery here http://randi-grace-nilsberg.artistwebsites.com/art/all/all/all/umbrella+series with the first umbrella images I took.

Well, today I took the challenge a little bit further and went to the seaside to shoot by the ocean. I started taking a couple of photos of the umbrella in the coarse sand on the beach. A small boat with two men drove by. Since sound carries very well over calm water I could hear every word they were saying: “What the hell is she doing? Taking pictures of an UMBRELLA?” Right then I laughed inside, but now I wonder what they would have said if they had returned two minutes later.

I had this perfect image in my head of the umbrella floating upside down on the water. From thought to action I flipped the umbrella upside down and leaned out to let it into the water. The ripples from the boat were helpful and pushed the umbrella towards the shoreline and me. I ran back to the camera which was ready on the tripod and got my shots.

THEN, for no reason at all the underwater currents changed direction and pushed the umbrella further and further away from me. I tried to throw rocks into the water to make the little waves bring the umbrella back, but that was a fruitless move. The umbrella was picking up speed and getting out of reach from where I was standing safe and dry on the beach. It all happened so fast that instead of thinking I acted and just walked out into the cold water and grabbed it. It’s late October, and normal people don’t get in the water in October. Not in Norway! So glad the two men in the boat didn’t return at that awkward moment when I was in water to my hips rescuing an umbrella worth 5 dollars!

At least I do what it takes to get that perfect shot! Just saying…….

Have a good one, all of you!